A 2015 report of Canada’s Truth and Reconciliation Commission claimed that anywhere from 4,100 to 6,000 Indigenous children died at the schools as a result of neglect or abuse.

“Something that everybody and every Christian can do is have that show of solidarity and not show up for church on Sunday,” said Felix Thomas, chief of the Kinistin Saulteaux Nation, to Canadian media on Friday, June 11. The Kinistin Saulteaux Nation, a First Nation community, is located northeast of Saskatoon, the largest city in the Canadian province of Saskatchewan.

“If it’s not this Sunday,” said Thomas to Catholics of skipping Mass, “pick a Sunday.”

Thomas was referring to Pope Francis having not issued a formal apology for the Church’s role in Canada’s residential schools. The remains of 215 Indigenous children were recently discovered in unmarked graves at the site of a former Catholic-run boarding school in Kamloops, British Columbia.

Canada’s residential school system operated from the 1870s until the last school closed in 1996. First Nations, Inuit, and Métis children were separated from their families and sent to the schools, established by the federal government and run by Catholics and members of Protestant denominations, to force assimilation and strip them of familial and cultural ties.

The Catholic Church, or Catholic religious orders, ran more than two-thirds of these schools. A 2015 report of Canada’s Truth and Reconciliation Commission claimed that anywhere from 4,100 to 6,000 Indigenous children died at the schools as a result of neglect or abuse.

Thomas hoped that the proposed liturgical boycott would send a message to Church authorities that Catholics in Canada are upset at the Kamloops school findings.

Since the discovery at Kamloops, there have been demands for Pope Francis to issue a formal apology. In response, Bishop Fred Henry, the retired bishop of Calgary, pointed to previous formal apologies by Canadian bishops over the residential school abuses. Cardinal Thomas Collins of Toronto also said that a formal papal apology would require a papal trip to Canada, involving significant logistical difficulties.

Pope Francis, at his Sunday Angelus on June 6, expressed sorrow over the findings at Kamloops and emphasized the need for a “turn away from the colonizing model.”

Another tribal leader, David Pratt, said that he does not think that Pope Francis has “gone far enough.”

Pratt is the vice chief of the Federation of Sovereign Indigenous Nations, an organization which represents 74 First Nations in Saskatchewan. In Canada, some Indigenous groups are known as “First Nation.”

“They have to apologize,” he said of the Church. “I know some people say it’s not important, but we believe it’s really important. There has to be an acknowledgment of the wrongs done by the Catholic Church.”

Pratt told Canadian media that there was “no excuse for (the Church) not accepting their role” in the residential school system. He said the lack of apology from the pope has compounded the pain of survivors of residential schools and their families, particularly since many members of First Nations are Catholics.

“Many of our people are practising Catholics as well,” said Pratt. “They need to hear the leader of their church recognizing the harms that they’ve done to them,” he added.

Individual bishops in Canada, as well as the Canadian Conference of Catholic Bishops and individual religious orders, have repeatedly apologized for the role played by the Church in operating the schools.

Meanwhile in Vancouver, a church run by the same religious order that formerly operated the Kamloops Indian Residential School – the Oblates of Mary Immaculate – was vandalized on Saturday.

The phrases “release the records” and “killers” were spray-painted on the door of St. Augustine’s Roman Catholic Parish overnight. The parish was founded by the Missionary Oblates of Mary Immaculate, the order that ran the Kamloops residential school from 1893 until 1969.

Kamloops, the city where the school was located, belonged to the Archdiocese of Vancouver until the Diocese of Kamloops was created in 1945.

Archbishop Michael Miller of Vancouver issued a “statement of commitment” to the First Nations of Canada on June 2, following the discovery of the remains.

In the statement he expressed his “deep apology and profound condolences to the families and communities that have been devastated by this horrific news,” and pledged full transparency with regards to any archival records of residential schools.

The following day, Bishop Peter Nguyen of Kamloops issued a similar letter, apologizing for the Church’s role, and pledging to develop “a long-term pastoral approach” for reconciliation and healing. 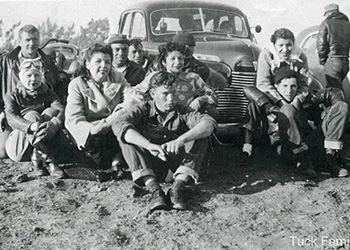